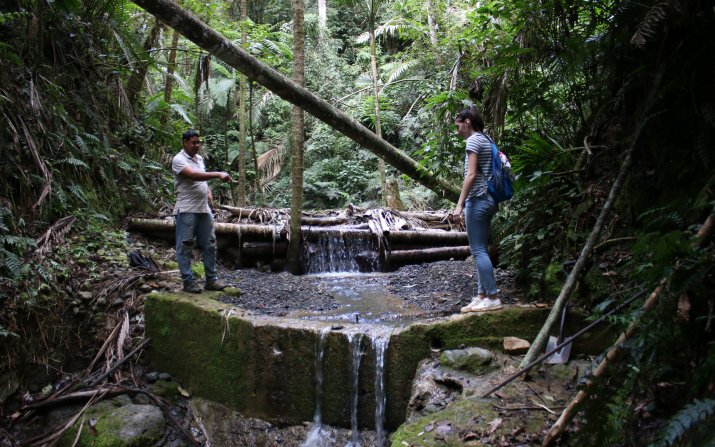 Under a scorching Costa Rican sun, Neil Chavan shoveled a load of sand into a wheelbarrow and hauled it down a dirt road to where fellow Case Western Reserve University students used the material to bury a section of pipe they'd just laid in a 3-foot-deep ditch. As monkeys shrieked from the treetops and the occasional cow passed by, Chavan returned for another load.

A third-year chemical engineering and environmental studies major at the time, Chavan was accustomed to solving complex problems in the classroom. But he had never used his know-how to solve a real-world problem like this one: designing and building a replacement water system in a remote village.

Chavan and the other students—all members of the campus Humanitarian Design Corps—developed their project plans in Cleveland and then traveled in March 2018 to Las Pilas, a 20-minute drive from the Pacific Coast. There, they installed a kilometer of new pipeline in just five days and trained residents—who had been running out of water during the dry season—to finish the second kilometer.

"They were so grateful for the help," said Chavan, who was team leader last year and returned in March on this year's team to evaluate the pipeline's condition, repair leaks and assess topsoil erosion that occurred during the rainy season.

For years, students at Case Western Reserve and other universities have used their technological skills to improve the lives of others—at home and abroad. But just over a year ago, the university set itself apart, ratcheting up support for such humanitarian projects with the launch of the new Center for Engineering Action.

"We are among a select group of schools that have chosen to make this an important part of engineering education," said James McGuffin-Cawley, PhD, senior associate dean at the Case School of Engineering and the Arthur S. Holden Professor of Engineering.

Consider the center a counterpart to CWRU LaunchNet, a university entrepreneurship program that mentors and cultivates creators and is integral to the campus innovation ecosystem. The center, likewise, is guiding, nurturing and elevating—but with a singular focus on humanitarian design initiatives. Students and faculty undertake these projects across the globe to tackle problems such as unclean water, inaccessible medical care and unsafe infrastructure.

And now it, too, is adding to the dynamism on campus, benefiting society and potentially attracting more student applicants. The university could become "a destination school for students who want to work on [humanitarian] projects," McGuffin-Cawley said.

The center's mission includes: encouraging the development of new projects—and bolstering existing ones—that draw students and faculty from disciplines across the university; serving as adviser and troubleshooter; organizing short study-abroad courses; connecting creators to funding sources and faculty to potential research partners in low-resource countries; and fostering ongoing collaborations with communities where projects are based.

"The idea is not to parachute in for two days," said Robert Kirsch, PhD, the Allen H. and Constance T. Ford Professor and chair of the Department of Biomedical Engineering, who was among the first center supporters. "This is to develop the infrastructure so residents can do the work themselves."

The center was the brainchild of Andrew Rollins, PhD (GRS '97, '00, biomedical engineering), a biomedical engineering professor who has worked with students on humanitarian projects since 2006. Now the center has grown to include nine faculty leaders from disciplines across the university and is making a difference in an expanding portfolio of projects—including those that existed before its launch. Some examples follow:

BEFORE THE CENTER, SOME PROJECTS DIDN'T OUTLAST STUDENTS' ACADEMIC CAREERS

From 2005 to 2013, the campus chapter of Engineers Without Borders (EWB) made at least six trips to Cruce de Blanco in the Dominican Republic, working on several projects, including rehabbing the water system, installing a pilot filtering project and designing a new system to distribute water to every house. While the effort had successes, it also exposed students to immense challenges involved in working on humanitarian projects, particularly those done intermittently and in rural communities. The work also underscored the need for a longer-term commitment now made possible with the center, said Matthew McPheeters (CWR '12; GRS '13, biomedical engineering).

Last year, a new group of students took interest and reached out to the original community contact, but five years had gone by and there was no response.

The project could have died there. But then the center stepped in.

Lynn Rollins tracked down a leader from the first student team, to intercede. "It took a while," she said, but eventually they got a response. In January, she and a Cleveland construction expert accompanied a new interdisciplinary team that returned to evaluate whether the water-filtration system was working.

"You can email, do Facebook, use WhatsApp, but nothing is real unless you're in front of people. It's a trust-building exercise," said Michael Douglass, a senior biomedical engineering and physics major who went on the January trip and was president of the EWB chapter for three years.

Jordan Deskins, a first-year Spanish and international studies major, helped translate, underscoring the value of having project members with diverse skills. "At first, it was hard because a team hadn't been there for years," she said. "But as the week went on, we felt comfortable and built trust."

Among other things, the students learned that the community didn't want to annually replace the sand used for filtration. So Douglass and other members proposed a new way to clean the water: a centrally located water tank that would use chlorine tablets for sanitization. "The solution has to work for the community or it's not a solution," Douglass said. Now students are designing the tank.

WHEN MORE THAN ENGINEERING SKILLS ARE NEEDED

During the last several years, university students have met with nurses at a hospital in Kampala, Uganda, about reducing pneumonia deaths in young children. The problem isn't so much the virulence of the illness, but that local clinicians lack access to a pulse oximeter, which measures blood-oxygen levels.

"You are never going to understand how to design a real solution for any problem until you understand who and where you are designing for," said Emily Long, a third-year electrical engineering and cognitive science major, GHDC's president and a member of the 2017 team that went to Uganda.

That kind of human-centered approach is emphasized in design projects and in two interdisciplinary undergraduate design courses that Rollins teaches with Janet McGrath, PhD, a professor of anthropology and member of the center's faculty steering committee.

Their "Global Health Design in Uganda" course—which could become a prototype for center-inspired academic initiatives—is focused on travel during spring break to Uganda, where the university already has a decades-old partnership, the Uganda-CWRU Research Collaboration.

It was because of the university's ongoing work in Uganda that McGrath—a longtime member of the collaboration—asked Rollins to take on more humanitarian design projects there, working with faculty and students from Makerere University in Kampala.

Team members from the two universities identified several projects now underway with help from the center.

One group is working to develop a method for safely disposing of self-injected birth control devices. Katie Steinberg, a fourth-year chemical engineering major, was so inspired by her trip to Uganda last year that she is researching disposal options for her senior project. "I realized how human-centric engineering can be and how engineers can change the world," she said.

Another group is designing carriers for health care workers who transport vaccines and related equipment to remote areas. The current ones are cumbersome and ill-equipped for the job, so students at CWRU and Makerere are using Skype to collaborate on a custom-designed backpack.

They've incorporated feedback from users who suggested, for example, that the backpacks include a pullout compartment to easily remove the vaccines, that they be sewn with more durable thread and use blue fabric instead of beige. "They want it to look more professional; the beige looked too much like a paper bag," said Jarrod Sinibaldi, a third-year mechanical engineering major at CWRU.

Students in both countries worked on prototypes, with the Cleveland group using a sewing machine at the Larry Sears and Sally Zlotnick Sears think[box], the campus innovation center, and the Kampala team working with local tailors.

More than a dozen different student-designed prototypes are being tested in the field.

HELPING INNOVATORS TAKE THE NEXT STEP

When Lynn Rollins heard about the Billion Bottle Project—a student startup working to increase access to clean drinking water worldwide—she reached out with a suggestion for a new source of funding and mentoring.

Rollins knew that VentureWell, a nonprofit based in Hadley, Massachusetts, provides grants to student entrepreneurs nationwide. So last September, she contacted Sanjit Datta, a fourth-year student at the university's School of Medicine, who led the creation of the project three years ago after learning that 361,000 children under age 5 die annually worldwide because of contaminated water and poor sanitation and hygiene.

The project team works to increase access to clean drinking water by making an existing technique— solar disinfection—more user-friendly. The process uses ultraviolet light to remove viruses and bacteria, but it can be difficult for users to know how long to treat their water.

Datta's idea was to create a sensor that changes color when the water is safe to drink; a prototype is being tested in Kenya.

So far, the startup's awards have included a $15,000 grant from the U.S. Environmental Protection Agency, the U.S. equivalent of about $64,000 from WorldLabs Elevating Ideas competition, a bronze award from the national Collegiate Inventors Competition— and $5,000 in a VentureWell grant, which will include mentoring and help getting the product to market.

"Lynn not only identified the grant for us, but helped us get all the necessary paperwork and approvals together on a very tight deadline," Datta said. Now she is guiding the project's application to VentureWell for a second-round grant.

PROVIDING MENTORING AND RESEARCH IN THE FIELD

When Chavan and his fellow team members were installing the new pipeline in Costa Rica in 2018, they knew they were missing a vital element: the help of local residents. Initially, only four villagers joined the students, leaving them baffled.

Where was everyone? The students talked among themselves and with Lynn Rollins, who was on the trip. After the second day of work, they organized a much-needed community meeting.

Chavan stood before about two dozen residents and said in Spanish: "We can't do this by ourselves. We need your help." When some residents expressed doubts that the students would accomplish their goals, Mauricio Ramos, a resident and president of the village's water committee, urged his neighbors to pitch in. "For our own benefit, we must help them succeed," Chavan recalled him saying.

The next day, more than 10 residents showed up to help install pipes. Others stopped by with cashew juice, fruit and words of encouragement. The community also contributed the U.S. equivalent of about $700 for materials—"an incredible sum for them," Chavan said.

The students' work "has been a blessing for our little town," Ramos said. "They have given us the chance to get better drinking water in each home. Neil and the students are doing a great job, and we are very grateful."

Now the center wants to go further. Kurt Rhoads, PhD, its executive director and an assistant professor of civil engineering, is seeking a grant with a colleague in computer science to install monitoring devices along the pipeline to collect data about patterns of use, leakage and other problems—information that can inform how "we can make better [water systems] in the future," Rhoads said.

Rhoads attributes the success of the Las Pilas collaboration to Chavan, who is so beloved in the community that one villager offered to set him up with her granddaughter.

"This project has given me the chance to apply concepts [learned in school] to improve the lives of others," he said.