Depth and breadth of university exploration on display at Research ShowCASE 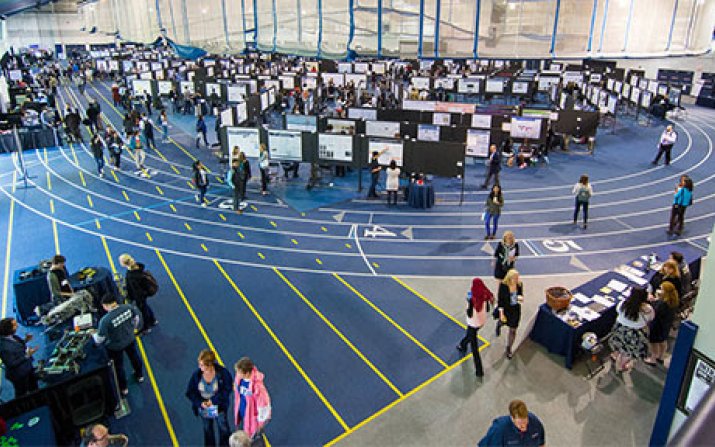 The enormity of research undertaken at Case Western Reserve University, from biologically inspired robotics to augmented reality demonstrations, will cover the vast main floor of the Veale Convocation, Recreation and Athletic Center in a daylong display known as Research ShowCASE.

“ShowCASE is my favorite event of the year,” said Suzanne Rivera, the university’s vice president for research. “It’s the one day when the whole campus comes together to celebrate inventions and discoveries in all the disciplines we practice here at Case Western Reserve.”

The 2018 ShowCASE boasts the largest number of participants—roughly 1,200—including about 1,000 undergraduates and more than 200 graduate students, according to Tracy Wilson-Holden, executive director for Research Integrity, Education and Outreach.

The event is held in conjunction with the Spring Undergraduate Symposium, known as “Intersections,” and the Celebration of Student Writing & Research. For more information and to view the full schedule of events, visit case.edu/research/showcase/.

Keynote speaker Indre Viskontas, a working soprano and scientist who combines a passion for music with scientific curiosity, will discuss “Can Creativity Be Trained?” She is affectionately known as “Dr. Dre” by her students at the San Francisco Conservatory of Music, where she is pioneering the application of neuroscience to musical training, and at the University of San Francisco, where she is an adjunct professor of psychology.

Viskontas has appeared on The Oprah Winfrey Show and multiple national radio programs, including several appearances on the National Public Radio program City Arts & Lectures and The Sunday Edition on the CBC in Canada. She also co-hosts the web series Science in Progress for Tested.com and VRV and is co-creator and host of the popular science podcast Inquiring Minds, which boasts more than 7 million downloads.

New this year, 85 local sixth-graders will visit the ShowCASE and related activities for a Girls in STEM program, with support from General Electric and the Office of Corporate Relations.

The visit will allow the young participants to learn more about careers in Science, Technology, Engineering and Mathematics and meet members of the university’s Women in Science and Engineering Roundtable (WISER) program—a student group based in the Flora Stone Mather Center for Women.

Among this year’s exhibit-floor highlights:

Microsoft HoloLens headsets allow users to interact with holograms in mixed-reality to learn about anatomy and beyond.

The capabilities of current mobile robots pale in comparison to those of most animals. The goal is to bridge this gap by studying animal systems and applying these designs and even their materials to robots to improve their mechanical designs, autonomous behaviors, locomotion and energy efficiency.

Featured robots from the Distributed Intelligence and Robotics Lab will include:

As the Internet of Things becomes a reality, not only must the technological challenges be resolved, but the social, ethical, business and political challenges as well. The university’s Institute of Smart, Secure and Connected Systems is positioned to organize teams of researchers to do just that.