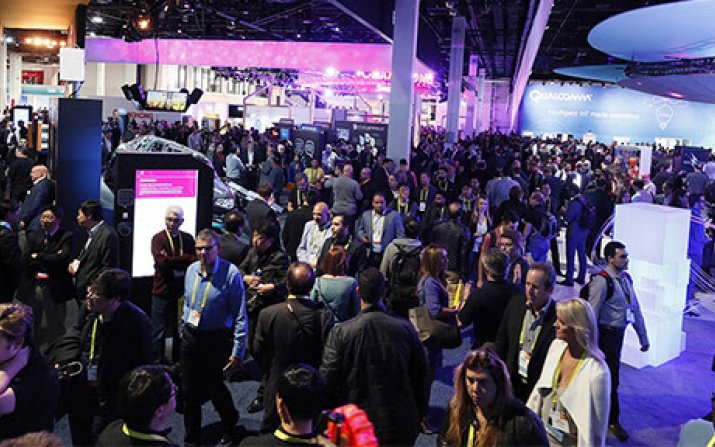 They’re seeking investors, partners and customers for existing startups and new companies. And at least two of them are promoting young women in STEM (science, technology, engineering and math) studies.

And that’s just the work of some of the students from Case Western Reserve University who will be presenting this January at CES 2019, the largest innovation and breakthrough technology show and convention in North America.

Also attending will be representatives from:

In fact, a contingent of nearly three dozen students, alumni, academic innovators and business developers, supported by the university’s Case School of Engineering and the nonprofit business incubator CWRU LaunchNet, will be in Las Vegas for the annual show and conference Jan. 8-11.

The Case Western Reserve entourage will occupy 12 booths in the Eureka Park area of the Sands Hotel showroom. If you’re on site, look for booths 51541-51552 in Sands Hall G.

Organizers believe they will once again comprise one of the largest contingents from a university in the sprawling show, featuring more than 170,000 attendees from about 50 countries.

“It’s ‘The Show,’ the big leagues, because it’s one of the largest gatherings of innovators in world,” said CWRU LaunchNet Director Bob Sopko, who accompanies the students to the trade show. “This is the place to be for innovation and it’s important for us to be there.”

This will be the sixth consecutive year Sopko has led an increasingly larger Case Western Reserve team to present at the show.

CES is owned and produced by the Consumer Technology Association (CTA). It is considered the world’s premier innovation and breakthrough technology gathering. It’s an annual international convention that draws tens of thousands of thought leaders, inventors, investors, and companies for multiple days of innovation, sharing and media buzz (look for #CES2019 on social media).

Sopko said there are many ways students can benefit from attending and displaying at the show.

“For some of them, it’s a chance to learn about new tech or have others learn about yours,” he said. “But for others, it’s finding a strategic partner, an investor, getting market validation or even finding out there is no market for your product.

“We remind them that pivots and possible failures are also a big part of succeeding and that each of them can be as successful as they want, and engaging in CES is a part of that.”

The 2019 CWRU lineup includes several new student- or faculty-led companies and projects, a few veterans of CES and the more institutional representatives from Sears think[box] and elsewhere.

There will be 12 total booths, including those staffed by Interactive Commons, Sears think[box] and Blockchain Cleveland, and an alumnus flying in from Jakarta for the show (Oona Tv). Among the university’s presenters expected are:

Donghui Li and Zhe Ren, both doctoral candidates in the Department of Materials Science and Engineering, have invented a bandage that removes easily after the adhesive holding it in place is exposed to ultraviolet light—an especially important development for elderly patients with delicate skin, which can actually tear when a standard adhesive is removed.

Beauty and the Bolt

The YouTube teaching site is run by co-founder Andrew Dupuis, a PhD candidate in biomedical engineering and researcher in augmented reality, and undergraduate entrepreneur Xyla Foxlin. The site is dedicated to making “learning engineering easy, inexpensive and accessible for anyone.”

The robotics booth will include Enabled Robotics, a company and product created in 2017 by Robert Steward, a third-year mechanical engineering major. Its early focus has been on helping people with physical limitations.

Prince Ghosh, a third-year mechanical and aerospace engineering student, will pitch Boundary Labs. He made it to the finals of the CleanTech University Prize competition earlier this year with a plasma barrier that reduces drag on wind-turbine blades and has pivoted to focusing on using IoT and big data for manufacturing solutions.

InSpirit, a startup team composed of a pair of MBA students at CWRU’s Weatherhead School of Management and two Cleveland Institute of Art students, is developing a “real-time, hydration-monitoring device” that will improve quality of life for the elderly and reduce nursing home negligence. The team won the 2017 Techstars Startup Weekend Cleveland with its idea.

Engage AR, a company created by second-year graduate student Brian Carano, will showcase “Pearl,” a mobile platform that uses object recognition and augmented reality to overlay AR content on products so brands can “engage and educate their consumers while interacting with them.” The platform creates “a more personal relationship with the consumer,” by delivering information and content in a more engaging way.

CrystalE is a project run by Philip Feng, associate professor of electrical engineering and computer science, and graduate student Devendra Waikul, who will present at CES. They are developing a suite of wireless sensors and sensor networks powered by vibrations from just about anything—the steady hum of industrial machinery to the intermittent movement of a swinging door.