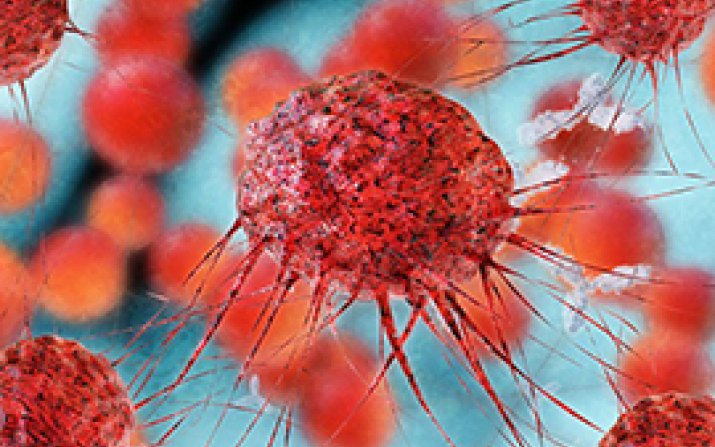 Physicists and engineers at Case Western Reserve University, including Umut Gurkan, assistant professor of aerospace and mechanical engineering, have developed an optical sensor, based on nanostructured metamaterials, that’s 1 million times more sensitive than the current best available—one capable of identifying a single lightweight molecule in a highly dilute solution.

Their goal: to provide oncologists a way to detect a single molecule of an enzyme produced by circulating cancer cells. Such detection could allow doctors to diagnose patients with certain cancers far earlier than possible today, monitor treatment and resistance and more.

The prognosis of many cancers depends on the stage of the cancer at diagnosis,” said Giuseppe “Pino” Strangi, professor of physics at Case Western Reserve and leader of the research.

“Very early, most circulating tumor cells express proteins of a very low molecular weight, less than 500 Daltons,” Strangi explained. “These proteins are usually too small and in too low a concentration to detect with current test methods, yielding false negative results.

“With this platform, we’ve detected proteins of 244 Daltons, which should enable doctors to detect cancers earlier—we don’t know how much earlier yet,” he said. “This biosensing platform may help to unlock the next era of initial cancer detection.”

The researchers believe the sensing technology will also be useful in diagnosing and monitoring other diseases as well.

Their research is published online in the journal Nature Materials. Strangi worked with postdoctoral researchers Kandammathee Valiyaveedu Sreekanth and Efe Ilker, PhD students Yunus Alapan and Mohamed ElKabbash, Assistant Professor of Physics Michael Hinczewski, co-PI Gurkan and Antonio De Luca, who was a visiting research scholar in Strangi’s lab during this study and is now an associate professor of physics at the University of Calabria in Italy.

The nanosensor, which fits in the palm of a hand, acts like a biological sieve, isolating a small protein molecule weighing less than 800 quadrillionths of a nanogram from an extremely dilute solution.

To make the device so sensitive, Strangi’s team faced two long-standing barriers: Light waves cannot detect objects smaller than their own physical dimensions, which range down to about half a micron. And molecules in dilute solutions float in Brownian motion and are unlikely to land on the sensor’s surface.

By harnessing nanotechnology tools and by coupling a microfluidic channel with an engineered material called a metamaterial, the scientist overcame the limits.

The microfluidic channel restricts the molecules’ ability to float around and drives them to the sensing area on the surface of the metamaterial.

The metamaterial is made of a total of 16 nanostructured layers of reflective and conductive gold and transparent aluminum oxide, a dielectric, each 10s of atoms thick. Light directed onto and through the layers is concentrated into a very small volume much smaller than the wavelength of light.

The top gold layer is perforated with holes, creating a grating that diffuses light shone on the surface into two dimensions.

The incoming light, which is several hundreds of nanometers in wavelength, appears to be confined and concentrated in a few nanometers at the interface between the gold and the dielectric layer.

The combination and the interplay of surface plasmon and bulk plasmon waves ​are what make the sensor so sensitive. Strangi said. By exciting these waves through the eight bilayers of the metamaterial, they create remarkably sharp resonant modes.

Extremely sharp and sensitive resonances can be used to detect smaller objects.

“It’s extremely sensitive,” Strangi said. “When a small molecule lands on the surface, it results in a large local modification, causing the light to shift.”

Depending on the size of the molecule, the reflecting light shifts different amounts. The researchers hope to learn to identify specific molecules, beginning with biomarkers for different cancers, by their light shifts.

To add specificity to the sensor, the team added a layer of trap molecules, which are molecules that bind specifically with the molecules they hunt.

In Cleveland, Strangi and Nima Sharifi, co-leader of the Genitourinary Cancer Program for the Case Comprehensive Cancer Center, have begun testing the sensor with proteins related to prostate cancers.

“For some cancers, such as colorectal and pancreatic cancer, early detection is essential,” said Sharifi, who is also the Kendrick Family Chair for Prostate Cancer Research at Cleveland Clinic. “High sensitivity detection of cancer-specific proteins in blood should enable detection of tumors when they are at an earlier disease stage.

“This new sensing technology may help us not only detect cancers, but what subset of cancer, what’s driving its growth and spread and what it’s sensitive to,” he said. “The sensor, for example, may help us determine markers of aggressive prostate cancers, which require treatments, or indolent forms that don’t.”

Strangi’s lab is working with other oncologists worldwide to test the device and begin moving the sensor toward clinical use.

“We consider this just the beginning of our research,” he said.