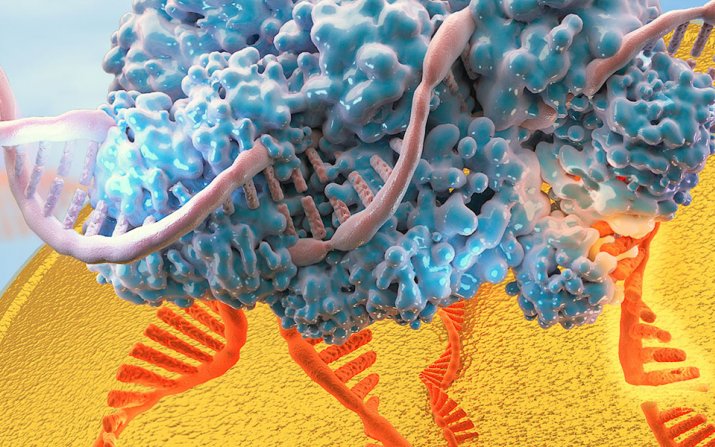 Case Western Reserve researcher finds new use for revolutionary gene-splicing tool; Electrochemical platform could lead to blood test for HPV, parvo or others

CLEVELAND—The gene-editing tool CRISPR has been heralded as a scientific miracle destined to eradicate diseases from sickle-cell anemia to cancer, or decried as “the genetic scissors that tailor the human gene pool,” an ethically risky technology pushing humanity toward a designer babies.

To do that, researchers converted the existing CRISPR “recognition induced enzymatic signal” to an electrical signal, which was then used to detect the biomarkers for those viruses.

“This could someday become a simple, accurate and cost-effective point-of-care device for identifying different nucleic acid viruses, such as HPV or parvo from a single droplet of blood,” said Yifan Dai, a PhD candidate in the Department of Chemical and Biomolecular Engineering lead author on a paper about the process which landed the cover story for Angewandte Chemie, a journal of the German Chemical Society. “And it would also be extremely fast.”

Dai said existing tests for those viruses take three to five days for an accurate result and can be expensive, while the biosensor envisioned by Case Western Reserve researchers would provide accurate results in under an hour.

According to the  U.S. Centers for Disease Control, HPV is a common virus that can lead to six types of cancers later in life. Nearly 80 million Americans are infected with some type of HPV, spread through intimate skin-to-skin contact.

Parvovirus B19, or parvo, spreads through respiratory secretions, such as saliva or nasal mucus, when an infected person coughs or sneezes. The virus can present a range of symptoms, depending on a person’s age and overall health. About two out of 10 people  infected with this virus will have no symptoms. Others may have only a mild rash.

The acronym CRISPR stands for “clusters of regularly interspaced short palindromic repeats” and is shorthand for CRISPR-Cas system, a specialized protein or enzyme that acts like a pair of molecular scissors, cutting specific strands or sequencing of DNA and thus short-circuiting the mutation.

Genome editing involves changing those sequences, thereby changing the genomic messages. This can be done by inserting a cut or break in the DNA and tricking a cell’s natural DNA repair mechanisms into introducing the changes one wants, according to a LiveScience report.

CRISPR-cas9, first used in 2016, was back in the headlines as news broke this week that scientists had created a new way to edit DNA, called “prime editing,” that appears to make it even easier to precisely and safely rewrite genes, while CRISPR had been successful mostly at cutting DNA.

E-CRISPR is the name Dai and co-authors gives to what they call an “electrochemical platform” that relies on the precision of the CRISPR technique to identify and quantify viruses in the blood.

What sounds complex is actually quite simple, Dai said,

“The CRISPR technique works so that it cuts all of the nonspecified single-strand DNA around it once the target is recognized, so we program to electrochemically probe this activity,” he said. “No virus—no cutting, but if CRISPR starts to cut, we know the virus is present.”