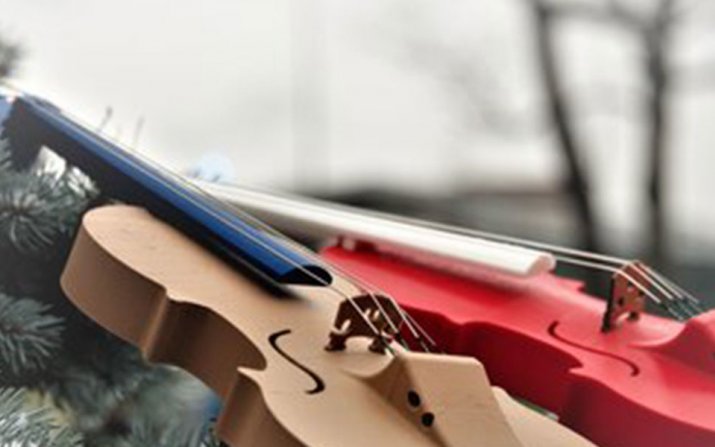 The engineers behind the 3D-printed violins will be among a half dozen exhibitors from Case Western Reserve University on-site and online for the hybrid virtual and in-person international tech convention in Las Vegas.

For the third straight year, 3D Music will demonstrate its 3D-printed violins at CES (the event was held virtually in January 2021) to media members, potential investors and collaborators during the convention of the latest innovations in technology, entertainment and more.

This time, 3D Music founder and engineer Matthew Canel is planning to actually print a pair of the colorful, hard plastic musical instruments on site during the Jan. 5-8 show and will have several others available for visitors to try out. Violins will be available for pre-order as well.

The process takes about 48 hours for just one violin, but gives convention-goers a look at how the musical instruments are produced.

“We’re excited to show how it works,” said Canel, who conceived and developed the musical instruments while studying at CWRU. “It’s really cool to watch as it comes together over about a two-day period and becomes a high-quality musical instrument.”

Canel is a double alumnus of the university who earned his master’s degree in 2021 from the Case School of Engineering. He has a patent pending on the violins and a production office on the seventh floor of the university’s 50,000-square-foot innovation space, Sear’s think[box]. He said among the selling points of the violins is that they are durable, safe and affordable.

“What makes our instruments special is that they are resistant to temperature and humidity and can withstand falls that would destroy a traditional wooden violin,” he said. “We also use the only plastic that does not have a Prop 65 warning by the state of California. Our instruments can also be easily cleaned, which is very beneficial with instruments used in schools.”

Proposition 65 is the California law that requires businesses to provide warnings about significant exposures to chemicals that cause cancer, birth defects or other reproductive harm.

The violins cost $200, although Canel is offering them to CES attendees for $150.

“We plan on using CES to do market testing,” he said. “We know there is a market for student players, but we plan to introduce our new full-size violins at CES this year.”

It will be the ninth-straight year in which some of the best innovators, engineers and developers from Case Western Reserve will show off their work at one of the world’s largest technology shows.

“We’re unbelievably excited to go there in person again after a virtual-only presence in January 2021,” said CWRU LaunchNet Director Bob Sopko, who organizes the university’s annual participation and mentors many of the student exhibitors. “People are excited about the chance to see people in person, to test out their ideas and validate their plans and innovations with potential partners, funders and other entrepreneurs from all over the world.”

But, as in other years, the CWRU contingent is more than just student innovators. The group includes alumni, faculty and even collaborators from other universities with less direct ties to Case Western Reserve.

“There’s a whole innovation ecosystem we play a role in,” Sopko said. “This year, we have two student groups who will have representatives here—one group to talk to manufacturers about their project, but in stealth mode, and another to learn about the financial modeling of startups and locate investors who might support their work.

“CES is really a living lab for innovators—from idea to production to marketing to collaborating and more.”

The Burton D. Morgan Foundation supports the Case Western Reserve exhibits at CES and many entrepreneurship activities on campus and across Northeast Ohio.

Several of the exhibitors for CES 2022 have also attended the highly regarded National Science Foundation I-Corps’ program and I-Corps-UARF (uakronuarf.com)

The other exhibitors from Case Western Reserve are:

This article was originally published Jan. 4, 2022.