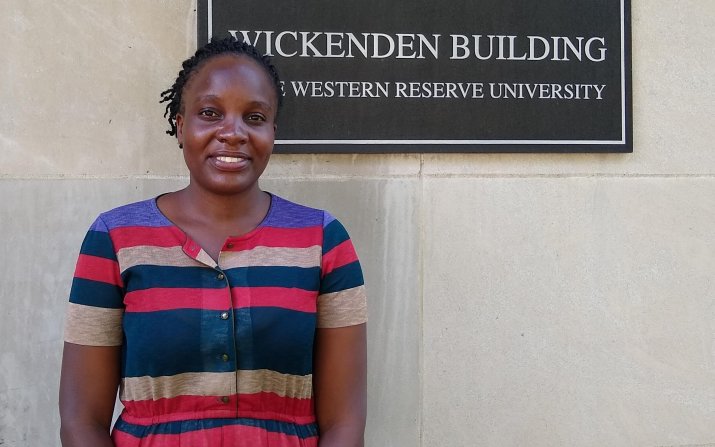 “I didn’t see this coming!  To be at CWRU- one of the world’s top Universities!”  That’s what Zoe Sekyonda said to me the first time we met shortly after Zoe arrived at CWRU from Uganda.

Zoe grew up the youngest of five siblings raised by her mother who was determined to see her children educated.  Zoe’s father passed away one week after she was born.  So it wasn’t easy.  Often Zoe started the school year late, since there wasn’t money to pay the school fees.  But her mother did not give up.  She took Zoe to the schools she could afford.  This meant that at the age of about seven, Zoe got in a taxi and headed to a boarding school about six hours from her home.  That’s where she learned to read and write.  While her mom came for visits, Zoe learned at a young age just how much her family would sacrifice and hard she was capable of working.  By the time she entered secondary school, she had earned herself a scholarship.  The only stipulation was that she had to remain second in her class.  This proved to be no problem for the bright, young girl.

The further along in school Zoe went, the more successes she seemed to stack up.  It wasn’t until her Senior year six exams (roughly equivalent to ACT testing for U.S. students), that Zoe faced her first set-back.  She scored high enough to pursue medicine but missed the marks needed on her exams to earn a government scholarship to go to Makerere University Medical School.  While disappointed, she did headed to Makerere University.  Fresh on campus, Zoe saw a note about Biomedical Engineering and decided to give it a try.  “It didn’t go very well my first year, though.  I had a bias against engineering.  I really wanted to go to Medical School,” Zoe recalls.  It wasn’t until her second year when she had the chance to work with students from Duke University that Zoe began to feel the draw to engineering. “I was working on studying the supply chain of Orthopedic implants in Uganda.  Since the government supplies all accessories in Uganda, this research involved the government.  Which had many challenges.  The work required a student with resilience. We needed research approval for everything we did.  This meant I was mentored closely.  My mentors opened many doors for me and I learned a lot about my country.”  She learned so much, in fact, that her research was published in the Global Health Journal.

Zoe’s next project was to identify markers to identify preeclampsia (a condition which affects 4 in 10 pregnant women in Uganda).  For her work on a point of care early diagnostic strip she was named a “Stars in Global Health” from Grand Challenges Canada. https://www.grandchallenges.ca/grantee-stars/1808-17405/

Then in March of 2019, Zoe met Dr. Andrew Rollins, professor of Biomedical Engineering and Faculty Director of the Center for Engineering Action, while he was in Uganda on spring break for his ENGR350U course.  One of the missions of the Center for Engineering Action is to build capacity in low resource communities by partnering in long-term relationships.  “The idea is to help build research and training capacity in Uganda by helping more Ugandans get their PhD training in biomedical engineering so they can go back and be faculty members and researchers there,” says Andrew Rollins.  Andrew returned to campus and began discussing the possibility of bringing Zoe to CWRU with support from the Center for Engineering Action.  Once he learned of Zoe’s accomplishments, Umut Gurkan,  Professor Mechanical & Aerospace Engineering and Research Director for the Center for Engineering Action, was ready to offer Zoe a research position in his lab.  After several months of planning, many emails, tremendous support from faculty and staff on both continents and (Zoe will tell you) lots of praying on her mother’s part, Zoe enrolled as a PhD student in Biomedical Engineering this past week.  While Zoe may not have seen it coming, clearly lots of her mentors along the way did!  We are to happy Zoe as a part of the CWRU community and hope you will welcome her when you see her!