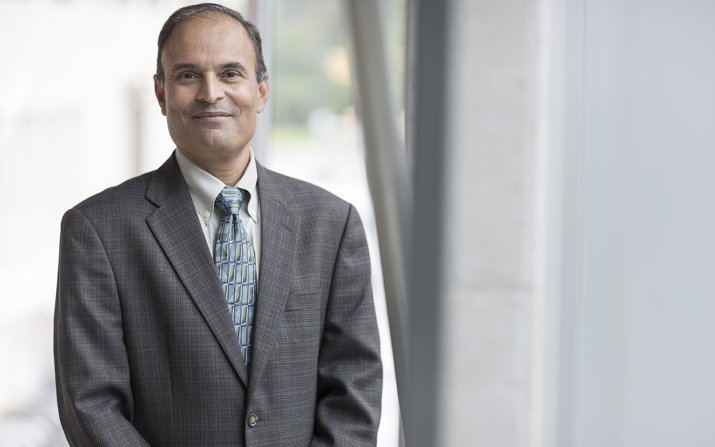 President Barbara R. Snyder announced today that the leader of one of the nation’s top programs for electrical and computer engineering will become the Case School of Engineering’s next dean this fall.

An accomplished researcher in system and control theory, Venkataramanan “Ragu” Balakrishnan has spent the past nine years as head of Purdue University’s largest academic unit. Under his direction, it has experienced dramatic growth in undergraduate enrollment, research funding, and faculty diversity, among other accomplishments.

“Through multiple leadership roles at Purdue,” President Snyder said, “Professor Balakrishnan has demonstrated an exceptional ability to blend strategic vision with effective execution. We feel great confidence that he will accelerate the school’s areas of existing momentum—and advance promising new opportunities as well.”

Balakrishnan earned his undergraduate degree in India, and then went on to receive two master’s degrees and his PhD from Stanford University. After postdoctoral stints at Stanford, the California Institute of Technology and the University of Maryland, he joined the Purdue faculty in 1994. Nine years later, Balakrishnan was a full professor and a leader of strategic initiatives and graduate admissions within Purdue’s School of Electrical and Computer Engineering, a unit of the university’s College of Engineering. He later led education within the school and then research across the entire college.

Along the way, Balakrishnan also received awards for his teaching and the prestigious designation of Fellow of the IEEE, the world’s largest technical and professional organization committed to improving technology to benefit humanity.

Upon assuming the interim and then permanent leadership role in electrical and computer engineering, Balakrishnan focused his efforts on encouraging collaborations across the university, engaging actively with external partners, reimagining education within the school, and increasing representation of women among faculty and students.

“Professor Balakrishnan recognizes the increasingly essential role that engineering plays in all aspects of society, in particular the ways that technology can improve lives—and, in some cases, save them,” said Provost W.A. “Bud” Baeslack III, who led two engineering schools before assuming his role at Case Western Reserve. “He is dedicated to creating communities that not only catalyze innovation, but also remove barriers to achieving it.”

Balakrishnan emerged as the university’s top candidate after a national search that attracted a large number of highly qualified candidates. A search committee led by Distinguished University Professor Hunter Peckham from the engineering school and Dean Pamela Davis from the School of Medicine spent several months winnowing the extensive list down to four finalists. These individuals participated in additional interviews with university leaders, including incoming Provost and Executive Vice President Ben Vinson III.

“Throughout this process I have been increasingly impressed by the talent, energy and successes of the Case School of Engineering,” Balakrishnan said. “The school and university clearly are on an exciting upward trajectory, and I am honored to have the opportunity to work with such an inspiring community.”

Balakrishnan will begin his term Sept. 1. Interim Dean James McGuffin-Cawley has agreed to remain in his current role until then. President Snyder and Provost Baeslack both lauded McGuffin-Cawley’s leadership over the past year, noting that he had done an outstanding job of building upon his predecessor’s efforts across research, education, industry engagement and philanthropy.

“President Snyder and I are extremely grateful to Jim for the exemplary leadership he has provided the school during this time of transition,” Provost Baeslack said.

In the most recent U.S. News & World Report rankings, Purdue’s School of Electrical and Computer Engineering ranked 9th for both computer and electrical graduate programs, and 12th and 8th for its respective undergraduate offerings in the same fields. Among the school’s achievements during Balakrishnan’s tenure are:

“For almost a decade, Ragu has been an outstanding Head of ECE, one of the largest schools at Purdue and consistently ranked among the top 10 in the nation. Under Ragu’s tremendous leadership, Purdue ECE’s faculty grew, physical facility expanded, research excellence continued, and educational innovation accelerated,” said Mung Chiang, John A. Edwardson Dean of the College of Engineering. “All of us in the College of Engineering are very thankful for his dedication and service. While Ragu will be sorely missed by ECE and the Purdue community, we wish him the very best as he starts this next chapter in his remarkable career.”