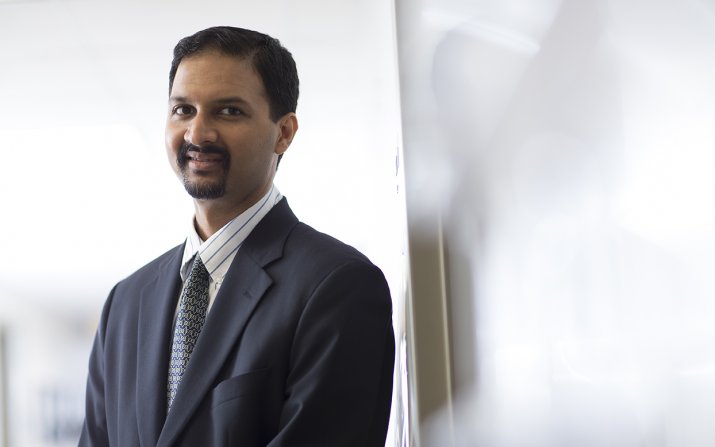 Winning recognition for one of 2018’s top 10 medical breakthroughs has only intensified Anant Madabhushi’s drive to bring the promise of artificial intelligence (AI) closer to patients.

Already this year, the F. Alex Nason Professor II of Biomedical Engineering has appeared in the world’s fifth-, 13th– and 21st-highest-impact academic journals in science, technology and social science. (Calculated by an external entity, the standings involve more than 11,500 journals and reflect a calculation of the number of times a journal’s articles from the previous two years have been cited in the following year.)

The most recent article—which appeared online Friday in Nature Reviews Clinical Oncology (ranked 21st)—offers a detailed analysis of how artificial intelligence can contribute significantly not only to diagnosing cancer, but also giving physicians personalized guidance regarding the best treatment options for each patient.

“The potential for artificial intelligence to improve cancer care is truly extraordinary,” said Madabhushi, who is corresponding author of the article published with CWRU research associate Kaustav Bera and colleagues from New York and Yale universities. “We wrote the article to broaden understanding of where this field stands today, as well as the scientific, medical and regulatory issues we must address to bring its promise directly to patients.”

Madabhushi came to Case Western Reserve in 2012 with a dozen other researchers who followed him from his lab at Rutgers University. The university team now numbers about 60, and has forged collaborations across Cleveland health care institutions—as well as colleagues around the world. The group has won about $36 million in federal research grants, and roughly six dozen patents. Along the way, Madabhushi has emerged as a global leading voice regarding AI’s potential to transform patients’ treatments—and cures.

Nature Reviews Drug Discovery (fifth-ranked), for example, published an article (PDF) regarding machine learning that Madabhushi co-authored with colleagues from U.S. and European research institutes and pharmaceutical companies. The piece reviewed how machine learning—a branch of artificial intelligence—not only has the potential to accelerate the discovery and development of medications, but also to reduce failure rates during that process.

Those articles follow Madabhushi’s appearance in the March edition of Nature (13th) as one of five researchers from around the world known for their innovative approaches to cancer research. The piece asked each for their advice to other scientists; for Madabhushi, the critical component of pioneering research is courage.

“At the end of the day,” he told the article’s author, “if you’ve thought things through carefully and your instinct goes against the advice you’re getting, you have to be willing to back yourself and take a risk.”

This fall, Madabhushi will welcome some of his most national prominent colleagues to campus as chair of the Case Comprehensive Cancer Center’s inaugural symposium on Artificial Intelligence in Oncology; its keynote speaker is Sohrab Shah, chief of computational oncology at Memorial Sloan Kettering Cancer Center. Find registration details online.