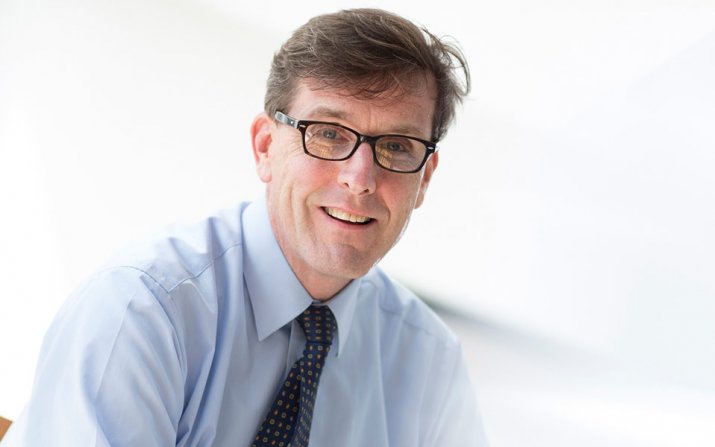 James McGuffin-Cawley has built his career around creating opportunities for students. It’s the main reason he transitioned into an administrative role at the Case School of Engineering several years ago. And it’s what led him to his new position as the faculty director of the university’s innovation center, Larry Sears and Sally Zlotnick Sears think[box].

Since stepping into his new role in July, McGuffin-Cawley has drawn on the same inspirations he’s held in prior positions—helping the institution evolve, connecting the right people with the right opportunities, working with students and collaborating with colleagues.

McGuffin-Cawley admits that when he graduated from high school, he had a limited understanding of higher education. He earned an undergraduate degree in ceramics before coming to Case Western Reserve University for his PhD in metallurgy and material science after just a year in the workforce. After graduating, he spent a few years at NASA Lewis (now NASA Glenn) and Ohio State University before returning to CWRU eight years later as an employee.

In the early days of McGuffin-Cawley’s tenure at Case Western Reserve, he was research-driven, holding a faculty position underwritten by NASA.

“That was a really productive relationship,” McGuffin-Cawley said.

But ultimately, he felt drawn to the administrative side of academia. He went on to be the associate dean of academics for engineering, the chair of the Department of Materials Science and Engineering and associate dean for research. For just over a year, McGuffin-Cawley was the interim dean of the Case School of Engineering before Venkataramanan “Ragu” Balakrishnan, the Charles H. Phipps Dean, came to CWRU.

Now at Sears think[box], McGuffin-Cawley looks to build upon the innovation center’s success. He is inspired by the center’s ability to help individuals take ideas from concepts to creations and then develop them into entrepreneurial ventures.

McGuffin-Cawley saw this ability in action with the innovation center’s response to the COVID-19 pandemic. His team fielded a flurry of time-sensitive projects, such as a request to create urgently needed plexiglass screens for eye exams in the span of one weekend—a project timeline not typical at a university.

“[The pandemic] really taught us that we can respond in ways that we should be making more broadly available,” McGuffin-Cawley said. “I think it helps the university be more responsive to the community and creates a lot of opportunities for students.”

Moving forward, he’d like to engage more faculty and graduate student researchers at Sears think[box] and further realize the center’s community impact. He sees the opportunity to look deeper into the process of education, exploring the efficacy of methods for technical education and envisioning the opportunity to develop closer relationships between the university and industry partners.

Get to know more about Sears think[box], but first, learn more about McGuffin-Cawley in this week’s 5 Questions.

1. What’s your favorite restaurant in Cleveland?

Fire at Shaker Square. My wife and I routinely go there and there’s something special.

2. What’s the most difficult class you’ve ever taken?

My toughest undergraduate class was a classical statics and strength of materials and mechanics class. It required me to do things that were entirely new when I got there. And when I was a graduate student, I liked to try to take classes just because they interested me and I overreached a couple times. I took a class in artificial intelligence when I was a graduate student in materials science. That was hard.

3. If you could live anywhere in the world, where would you pick?

I like to live where I’m living and travel to places in the world. That is the honest answer.

4. What famous person—alive or deceased—would you most like to meet?

I read autobiographies just because I’m interested in how people made their path, especially people who ran into a lot of challenges and then ultimately succeeded. Somebody like Ulysses S. Grant would be an example. I don’t have an obvious answer.

It’s absolutely the students. One of the things I think is really special about [CWRU] that I treasure is the soft boundaries. You go see something in the theater and you look at the students who are performing, half of them are theater majors and half of them are not—they come from different majors all around campus.