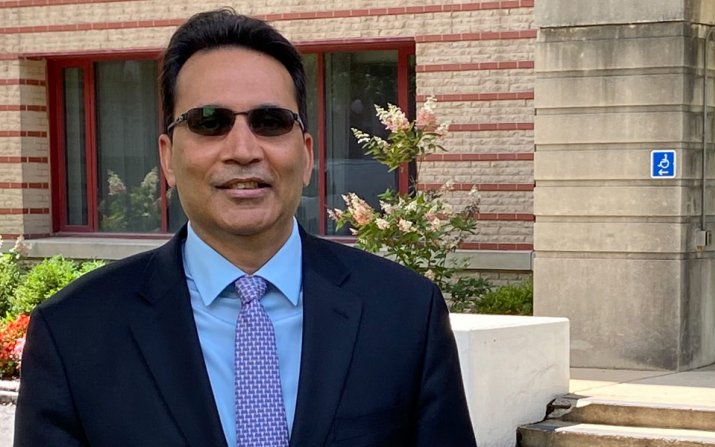 Vipin Chaudhary discovered his passion for electronics, computer science and computing early in life. Starting in his middle school years, he began building radios and music systems. But his path to computer and data science started in earnest in 1980, when his father, a professor of electronics and communications systems, gave him an “Introduction to Computers” book.

“I remember reading that book multiple times and at that time everything in it was just amazing—I was hooked.”

Now, many years later, Chaudhary brought his love for computing to the Case School of Engineering, where he took on the role of the incoming Kevin J. Kranzusch Professor and chair of the Department of Computer and Data Sciences in early August.

The new department was made possible primarily with a $5 million gift from Kranzusch, a Case School of Engineering alumnus and vice president of NVIDIA, a Santa Clara, California-based technology company.

Chaudhary, who most recently held the role of program director for the National Science Foundation’s Directorate for Computer and Information Science and Engineering in the Office of Advanced CyberInfrastructure, said he is excited to lead the new department as it will play an important role in meeting the increased demand for data science experts.

“Data science is increasingly essential in almost every discipline, driving strategic decision-making across organizations,” he said. “The new department will centralize and expand upon a legacy of strength in computing, providing a platform for collaborations across the university and with external partners. Innovative research and faculty initiatives translate to increased opportunities for undergraduate and graduate students to participate in and learn from researchers on the cutting edge of the field.”

Chaudhary is no stranger to the myriad uses of computing and data science across multiple industries—over the last three decades he has actively participated in the science, business, government and technology innovation frontiers of high performance computing. His contributions range from heading research laboratories and holding executive management positions, to starting new technology ventures. He has held numerous faculty positions, most recently at the University at Buffalo (SUNY Buffalo), as the Empire Innovation Professor of computer science and engineering.

His industry experience will be used in the classroom and research labs as he challenges students with real-world problems: “I try to incorporate tools that are very popular in industry and will usually assign a project that involves working in groups to simulate the industry work culture. Elucidating the context of how the skills being learned in the class can be used in the real world makes it easier to understand.”

Of his transition to CWRU, Chaudhary shares: “Despite the COVID-19 circumstances, the Case Western Reserve community has been amazingly helpful and welcoming.”

Chaudhary took some time during his recent move from northern Virginia to Cleveland to answer our five questions.

1. What are the top three things you’re looking forward to doing in Cleveland?

Meeting my colleagues in person, attending some professional sporting events and visiting local art museums, the Rock and Roll Hall of Fame, and local restaurants.

2. What’s the most difficult class you’ve ever taken?

An English literature course as a freshman in college.

3. If you could live anywhere in the world, where would you pick?

On the Big Island in Hawaii.

4. What famous person—alive or deceased—would you most like to meet?

It’s hard to pick just one, but one of them would be the amazing mathematician Srinivasa Ramanujan, who died at the age of 32. It is just impossible to figure how he came up with solutions.

5. What are you most looking forward to in your new role at CWRU?

Building collaborations between the Department of Computer and Data Sciences and other units across the school, the university, and with external partners, as well as meeting the students and my new colleagues.