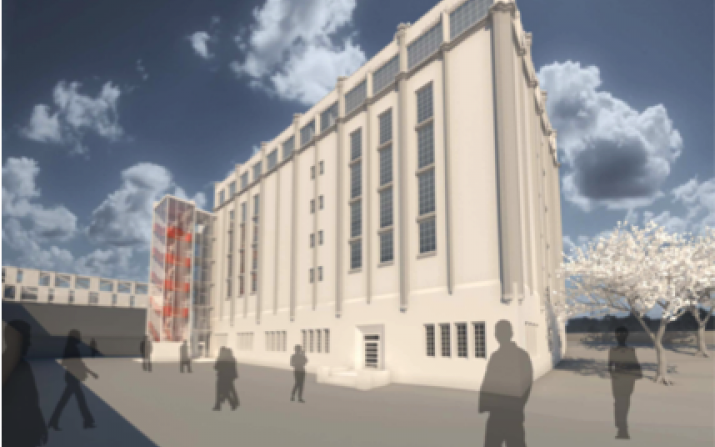 Case Western Reserve’s think[box] project has always been a little different. From its lower-case name to its basement “startup” space, the innovation hub has consistently defied convention as it sought to become a full-sized reality.

Little wonder, then, that when it came time for construction to start, the kickoff was anything but a traditional groundbreaking with hard hats and shovels. Instead university leaders and the project’s leading supporters each flipped a large switch Thursday night, sending a video version of a think[box] rocket toward the sky—complete with rumbling engines and actual plumes of smoke filling the tent on Toby’s Plaza.

Renovation work begins this fall on the first phase of the seven-story, 55,000-square-foot space that will house think[box], with plans for that initial portion to be completed within a year. Located in a storage structure located on the southwest edge of campus, think[box] will feature large workshop spaces, meeting rooms, and even offices for entrepreneurial advisers.

To date, President Barbara R. Snyder said Thursday night, think[box] supporters have contributed more than $25 million. Among those present during the formal celebration were:

President Snyder also cited two other significant supporters unable to attend Thursday’s celebration. For example, she said, alumnus James Wyant had announced a $3 million commitment to the project last week during the dedication of the Wyant Wellness and Athletic Center. In addition, she noted, 1943 chemical engineering graduate Cloud Cray had pledged $2 million to the project.

“He recognizes the importance of think[ box ] to our students and the broader economy,” President Snyder said, “… and we could not be more grateful.”