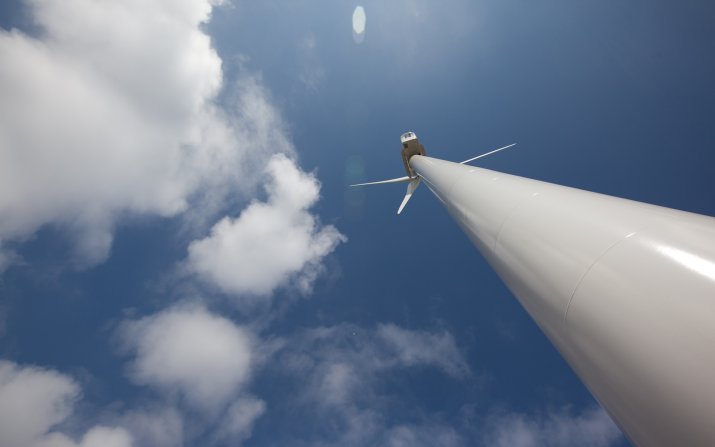 There are lots of moving parts to bringing the world’s first freshwater wind turbines to Lake Erie by 2018, but Case Western Reserve University researchers are focused on keeping one critical piece from moving too much: the vertical support structure.

Several methods to anchor nearly 500-foot-high wind turbines in fresh water have been proposed and tested in laboratory models in recent years, even as construction plans continue for the $126 million, six-turbine wind farm about 10 miles northwest of Cleveland.

This newest wrinkle from Zeng and his team will be included in an upcoming report to the U.S. Department of Energy (DOE), he said. Whether it becomes part of the Lake Erie wind farm or a future project, it will have great value in improving the efficiency and economics of siting wind turbines in fresh water.

“The foundation is critical to the safety of such a huge structure,” Zeng said. “And because the foundation cost is about 20 to 25 percent of the total project, finding a safe and economical solution is vital.”

Xuefei “Sophie”  Wang, a research associate in the Department of Civil Engineering, led the lab testing of support structures a small fraction of the size of what will be built in Lake Erie.

Wang is also lead author of a new paper in the professional journal Applied Energy that examines what the team calls the “hybrid monopile.” Co-authors include Zeng and PhD candidates Xu Yang and Jiale Li.

The research, like much of the work so far on the Lake Erie wind turbines, was funded by the DOE.

“Others focus on the blades or other components, but our job is to focus on the foundation,” Wang said. “Everything else depends on that being done right.”

The Lake Erie wind project, proposed originally in 2009 by the non-profit Lake Erie Energy Development Corp. (LEEDCo), is expected to generate nearly 21 megawatts of electricity—enough to power nearly 8,000 homes—and could be the precursor to a much larger offshore windfarm, officials have said.

Case Western Reserve is a partner with LEEDCo on the project, which was awarded a $2.8 million DOE grant to design the demonstration wind farm.

Wang and the Case Western Reserve team propose employing the existing “pile” structure—the vertical support driven into the lake bed—but then surrounding it with a plate, or wheel-like structure, to better distribute and support the pile against the force of wind, waves and ice on the portion of the structure at water level.

The wheel, possibly filled with gravel, would not only provide better stability than the bucket method, but would require significantly less site preparation and be less expensive to install, Wang said.

“We know in Lake Erie that the ice will hit the foundation directly, and that’s a big challenge here,” she said. “The hybrid monopile shows a lot less motion when that happens because of the plate or wheel on the lake bed.”

The project is being built and will be operated by Icebreaker Windpower Inc., an  Ohio company that develops technologies allowing turbines to be installed in water that freezes in the winter.