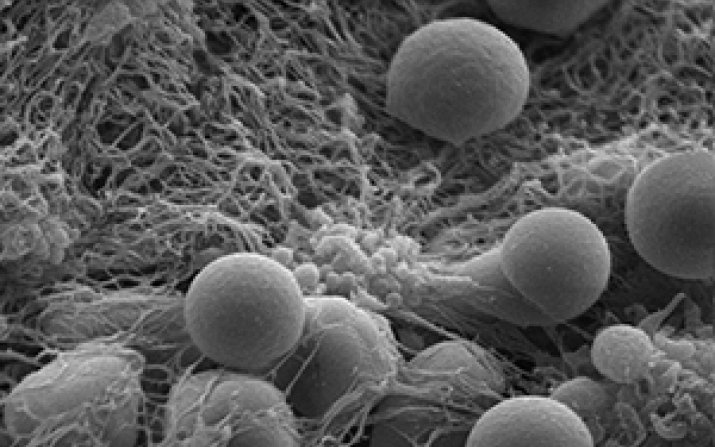 A type of artificial platelet being developed to help natural blood platelets form clots faster offers promise for saving the lives of soldiers, as well as victims of car crashes and other severe trauma.

In preclinical tests led by a Case Western Reserve University researcher, the artificial platelets, called “hemostatic nanoparticles,” when injected after blast trauma dramatically increased survival rates and showed no signs of interfering with healing or causing other complications weeks afterward.

“The nanoparticles have a huge impact on survival—not just in the short term, but in the long term,” said Erin Lavik, an associate professor of biomedical engineering at Case Western Reserve. Other researchers had raised concerns that the foreign matter would interfere with healing, or form free-floating clots, but “we saw none of that.”

The research, published in the Proceedings of the National Academy of Sciences this week, show the survival rate of mice models of blast trauma treated with the nanoparticles increased to 95, compared to 60 percent for those untreated.

Also, no unwanted side effects, such as accumulation of the nanoparticles, clot formation or aberrant healing, were found during examinations one and three weeks after the injection.

Explosions account for 79 percent of combat-related injuries and are the leading cause of battlefield deaths, according to researchers at Veterans Affairs hospitals and the federally run Uniformed Services University of the Health Sciences.

The primary blast wave, flying shrapnel and being thrown to the ground cause the lungs, liver, kidneys and other organs to hemorrhage and bleed uncontrollably.

Such uncontrolled bleeding from collisions, blows and falls is also the leading cause of death among victims age 5 to 44 in the United States.

Natural blood platelets are the key ingredient to stopping bleeding, a process called hemostasis. The process works well for typical cuts and scrapes, but can be overwhelmed with serious injuries.

Hospitals try to stem internal bleeding by giving trauma patients blood products or the hemophilia medicine called recombinant factor VIIa, but there isn’t a good option for the battlefield or accident scenes. Recombinant factor VIIa must be refrigerated, costs up to tens of thousands of dollars per treatment and can cause clots in brain and spinal cord injuries, which are common from explosions.

Lavik’s team has fine-tuned the nanoparticles to increase clotting efficiency. “They are incredibly simple… spheres with arms of peptides that react with activated blood platelets in damaged tissues to help clots form more quickly,” she said.

The particles are made from short polymer chains already approved for other uses by the U.S. Food and Drug Administration. In earlier testing, rat models injected with the nanoparticles stopped bleeding faster than untreated models.

The dry particles remained viable after two weeks on a shelf. A medic in the field or an ambulance crew would add saline, shake and inject them, the researchers say.

Further research and testing are underway. Clinical trials on humans are likely at least five years out, Lavik said.

The research was funded by the U.S. Department of Defense Grant W81XWH-11-2-0014 and the National Institutes of Health Director’s New Innovator Award DP20D007338.