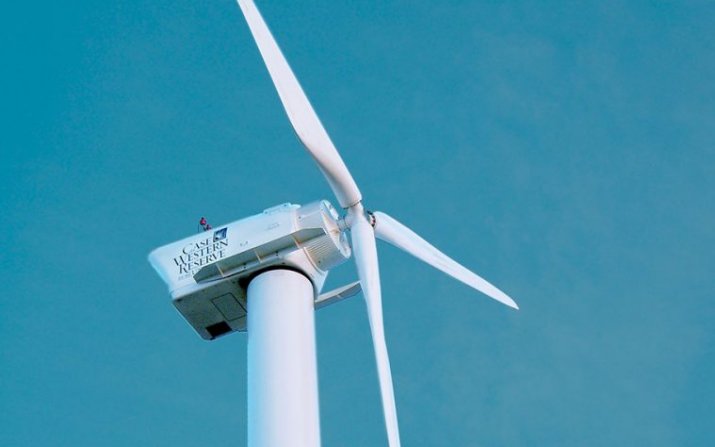 When an internship fell through last summer, Case Western Reserve University student Prince Ghosh used his extra energy and the unexpected free time to work on another project—one with potential to increase the efficiency of wind turbines and airplane wings.

“It seemed as good a time as any to build a prototype, so I spent the summer with a friend using the wind tunnel right here on campus to test it out,” said Ghosh, a third-year undergraduate mechanical and aerospace engineering major. “I think it went pretty well.”

Pretty well, indeed: The startup company that emerged from that project, Boundary Labs, is a finalist in the U.S. Department of Energy-sponsored $50,000 “Switched On: Student Innovations in Cleantech,” a clean-energy competition for student innovators at universities in the Midwest.

Ghosh and his team, which also includes four other Case Western Reserve students, will be in Chicago on Thursday to pit their technology against students from Northwestern, the University of Minnesota and five other universities.

The contest, also known as the Cleantech University Prize (UP,) is run by Clean Energy Trust, a non-profit formed in 2010 to build a “vibrant cleantech ecosystem in the Midwest.”

The top three teams in Chicago will qualify for the national finals in June and a shot at $100,000 in prizes.

“We definitely want to keep that tradition going—we want to win, too,” Ghosh said. “But our ultimate goal is really to make wind a more affordable and reliable source of renewable energy.”

The other students on the Boundary Labs team, who Ghosh said all met during a Great Lakes Energy Institute ThinkEnergy Fellowship in the fall of 2017 at Case Western Reserve, include Case Western Reserve students Lucas Fridman, Amit Verma, Alejandro Owen and Nihar Chhatiawala.

The idea and the origins

The product they’ll be pitching to judges, referred to by Ghosh  as “dielectric barrier discharge plasma actuator technology,”  is essentially a method for reducing aerodynamic drag over wind-turbine blades, or, eventually, airplane wings.

“Think of it as a plasma layer around the wing; one that would significantly reduce turbulence,” Ghosh said. “And because turbulence is essentially drag, reducing it will increase efficiency.”

Ghosh said he is seeking a patent on the process, so could not explain it in more detail, except to explain that plasma is a “highly excited group of particles that re-energizes the dead, chaotic airflow behind and turbine blade or wing and makes it smooth again.”

He said he first began thinking of the technology as a first-year student while reading about the non-linear chaos theories of a Russian scientist—ideas that never made it out of the lab.

“It’s been on my mind for a while,” said Ghosh, who hopes to eventually pitch the technology to wind energy and aerospace companies. “It’s good to get it out there to see how it works in the real world.”

Ghosh and the Boundary Labs team will compete against seven other student-led initiatives, several focusing on “smart grid” solutions and others on solar energy, energy storage and pollution control.

Student teams are paired with industry mentors to help them develop their ideas, refine their products and grow their brand, when ready.